Everything seemed to have come together. Even the unusually mild weather appeared cooperative. It was one of those rare Saturdays when I wasn’t committed to someone else’s demands or to house work, and I was in the mood to pull some weeds. I would be out in the garden at first light.

My gardening time consists of weed-pulling, dead-heading, and watering. But it’s also the time I spend alone with God; when I’m most likely to discern His voice. That’s what I really looked forward to early that summer Saturday.

Trowel in hand, I settled on the spot requiring the most attention. The weed-pulling began. The meditation mode began. The listening began.

And the barking began.

Our neighbors were dog-sitting, and the pooch was not pleased to be in our neighborhood. The barking continued the entire time I was in the garden. My teeth clenched. My neck stiffened. My head began to pound. Try as I may, I could not block out the sound of the incessant barking.

I was listening for God’s voice, but I couldn’t hear it because of the barking.

It’s not that God can’t be heard over the barking of a small dog. His is the voice that sounds like thunder. Like a mighty wind. Like rushing waters. No, I couldn’t hear God’s voice because I allowed myself to be distracted. 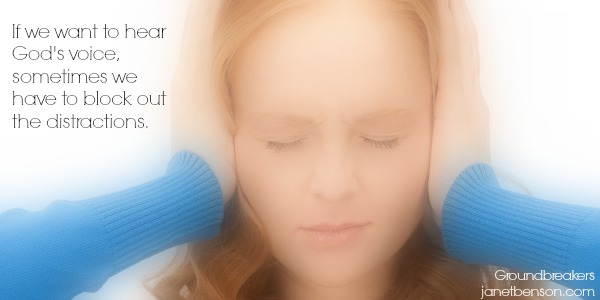 But Jesus often withdrew to lonely places to pray. (Luke 5:16)

Most days God has nothing against my listening for His voice in the garden. Considering He created man in a garden, I believe they are some of His favorite places. But sometimes I think He wants every single one of my thoughts. Even though weeding and dead-heading don’t demand much mental attention, there are times God wants even the tiny bit those rote tasks require.

I gave up on the gardening and continued my seeking indoors. Maybe it was the walls of our house. Maybe it was my obedience to seek beyond the distractions. Whatever the reason, I no longer noticed the barking.

Since then, I’ve recognized other barking dogs. I’ve realized how many times I’ve allowed texts, emails, and even laundry to interrupt my quiet time. I’ve noticed that my seeking is often reduced to nothing more than fill-in-the-gaps of daily tedium.

Rejoice always, pray continually, give thanks in all circumstances; for this is God’s will for you in Christ Jesus. (1 Thessalonians 5:16-18)

God certainly wants us to live our lives in a continual state of prayer. But, sometimes, can’t you just feel Him reach down and cup your face in His hands… saying, “Look at me.”? There are times when He wants our undivided attention.

Some days He lets the dogs keep barking, just to send us inside to that quiet place with only Him. Nothing else.