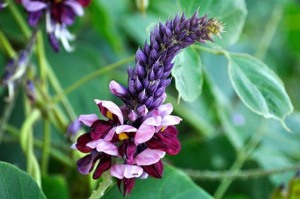 With her carefully chosen flowers spread in colorful waves across the counter, she handed me her payment and declared, “I’ll kill every single one of these.” My question of “why?” must have conveyed itself through my bewildered expression, because I didn’t even have to ask before she offered her reasoning for the odd statement. “Because I’ve killed every plant I’ve ever tried to grow. I even killed Kudzu once.”

This early spring afternoon, as I breathed in the promises held in a fresh season, I was reminded that it simply isn’t our nature to be hopeful.

Those of you not blessed to reside in the southeastern US may not be acquainted with kudzu. Those of us who know it understand its capacity for growth in horror-story proportions. It swallows houses in only a couple of growing seasons. Its resilience provides super-plant powers. Enduring the most threatening heat and drought conditions of our blistering summer, this master at survival thrives on neglect, making it almost impossible to kill.

“It was a high school science experiment,” she continued. “We had to propagate and grow a plant. Someone suggested kudzu because you can’t kill it. But I did.” Ever since, she’s been convinced there isn’t a plant on the planet she can grow.

I asked why she kept putting herself through such frustration and expense year after year. “I guess it’s the challenge of trying to find the one plant I can’t kill,” she remarked as she meandered to her car, assuring me that every plant she took with her was destined for death.

It’s sad to see people with such low gardening expectations. That’s one of the reasons I love to watch children learn about planting seeds and growing plants. We tell them what’s going to happen to that little six-pack of petunias as they dig the hole and bury the root ball, and their faces beam; their little eyes sparkle with anticipation. They believe that what we tell them is actually going to happen, and they can’t wait. That’s what gardening is about.

The hope of something beautiful.

Seasoned gardeners buy plants and do everything they know to be right for their particular variety. They plant them in the right kind of soil. They locate them in the proper amount of sunlight or shade. They place them where they will have proper moisture. Then, they wait. They expect the plant to grow and thrive. Because that’s what the plant is supposed to do.

Why should they expect otherwise?

My less-than-optimistic gardening friend didn’t realize the death of her kudzu was probably caused by one simple thing. Too much water. Not understanding the minimal amount of moisture this drought-resistant plant requires, she probably watered it like she would have a typical houseplant. One mistake. One failure at the very beginning of her gardening experience convinced her for the rest of her life she didn’t have what it took to be a gardener. She doubted her abilities until she believed a lie about herself.

Let me point out something about this young woman. She doesn’t lack self-confidence. She plunges headlong into life with determination. Don’t mistake her gardening insecurities for a lack of belief in herself. She believes she can accomplish almost anything through hard work and persistence. But gardening is her area of weakness. The only thing she believes about her gardening skills is that she has none.

Don’t we all have those areas? Isn’t there at least one corner of each of our lives where we doubt? That one facet of our beings where we simply don’t expect much.

As I got ready for church, I became ill. It came suddenly and fiercely and there wasn’t time for me to find someone else to teach the class. I couldn’t make sense of this. I knew God led me to agree to teach on this particular morning. Not a doubt in my mind about that. Why would He let this happen?

I prayed a prayer of desperation. “If You want me to teach, take this sickness away.” Just one sentence. In less than sixty seconds the illness was completely gone. Instant health. It was the most amazing thing I had ever experienced. I couldn’t believe it!

That was the sad part… I couldn’t believe it.

What had I expected? I clearly discerned God’s voice asking me that very thing. I had asked Him to take the sickness, hadn’t I? Why was I so surprised when He did it? And let me tell you, I wasn’t just surprised\. I was astounded. Dumbfounded. Astonished.

I’d been worried because I couldn’t stop my sickness. Worried because I didn’t have time to find a replacement. Lesson learned, right? From this point on I would pray only with expectancy. Right?

So it would seem.

Lesson number two.  My grandson had been diagnosed with Attention Deficit Disorder. His medication wasn’t helping and his behavior at school was becoming a serious problem. His mother, my daughter, was at the end of her rope.

My daughter learned of a child psychologist who was highly recommended in the area of ADD. She had called for an appointment for my grandson, and was told that it would be more than a month before the doctor could see him. Her only choice was to take the appointment and wait, with the promise that her son would be placed on a waiting list in the event of a cancellation. Several were ahead of him on the list and cancellations were rare, she was told, because the doctor was in such demand.

More behavior and class work problems arose each passing day. My daughter was losing hope. Out of desperation for advice, she would often call me in tears. One particular night when she called, a message on praying expectantly was fresh on my mind. I did a lot of praying for my grandson and my daughter that night. The next morning I awoke with a resolve truly to pray expectantly about this situation. I laid it out before God and asked Him, if it was His will, to do something about it that very day. I thanked Him for answering my prayer, and I left it with Him.

For the first time in weeks I went to work not worried about the situation.

My daughter called that afternoon. “Mom, you’re not going to believe this!” The child psychologist had called that morning. There was an opening for my grandson that very afternoon. My daughter was on her way to pick him up from school and take him to the appointment.

Talking a hundred miles an hour, she went on to tell me that all five people who had been ahead of my grandson on the waiting list had been unable to accept the open time slot. “What are the odds?”

“Let me tell you something that you won’t believe,” I said. I went on to tell her about my expectant prayer of that morning. “Wow! I guess God really does answer prayers,” was all she could say.

She called me later to fill me in on the details. At the end of the consultation the doctor told my daughter it was crucial she bring my grandson back for a follow-up visit in exactly one month. The change in his medication must be monitored carefully, and the time frame was critical.

Knowing how difficult it had been to schedule the initial appointment, she went to the receptionist’s desk prepared for disappointment. It would be an impossibility to get an appointment in exactly one month.

The appointment that all five people on the waiting list were unable to take advantage of… it wasn’t a cancellation at all. It was an opening that had never been scheduled. For anyone. For some reason, the receptionist explained to my daughter, she had simply failed to fill it in. Still shocked over her mistake, the receptionist told my daughter she had never done that before. But what did she expect? I had never prayed a prayer like that before.

I wish I could say that every prayer I pray now is prayed with complete expectancy. At least I can say it doesn’t happen as often these days.

I’ve stopped thinking that if I pray enough prayers, maybe there will be that one that God will answer… like my friend trying time after time to stumble across that one plant she might not kill. I’m so grateful that God didn’t give up on me while I learned to pray expectantly. I’m so thankful to Him for showing me my areas of doubt, and for showing me that His ability to answer my prayers have nothing to do with my capabilities.

And I will be eternally grateful to Him for giving me the faith to believe that His Word is true; that the things He tells me will actually come to pass. Because, like gardening… isn’t that what faith is all about?

The hope of something beautiful.

“I waited patiently and expectantly for the Lord; and He inclined to me and heard my cry.”  (Psalm 40:1 AMP)

“But when you ask, you must believe and not doubt, because the one who doubts is like a wave of the sea, blown and tossed by the wind. That person should not expect to receive anything from the Lord. Such a person is double-minded and unstable in all they do.”  (James 1:6-8, NIV) 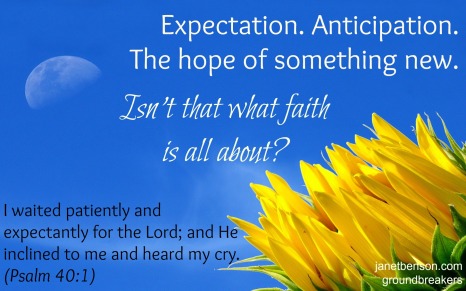 This post is a modified excerpt from the book Break Up Your Unplowed Ground: Unearthing God’s Desires for Your Life.

22 thoughts on “What did you expect?”