I used to hate Valentine’s Day. I dreaded it so much that I even considered calling in sick and staying home from work. It was the one day every year when my singleness seemed to be magnified a thousand percent.

It was the flowers. All those flowers. Everyone else in the whole building seemed to get flowers. And candy. And cards. My desk sat void of gifts, looking as forgotten as I felt. Was I the only person without someone who had chosen them to be their most special person?

It was like a flashback to dodge ball games in elementary school. There was always that very last person to be picked for a team. I don’t ever remember being that person, but I do remember hurting for them as I watched the dwindling number of unchosen children left huddled together in humiliation. No one wanted to be the last one. That one left standing all alone and exposed for the world to see. The one with “undesirable” written all over them. Nobody wanted to be the one no one else wanted.

Those days are long past. This Valentine’s Day my husband and I will exchange cards and a kiss with our morning coffee. But, there won’t be flowers. There will be no chocolate (unless I cave and buy myself a box of chocolate-covered cherries). We have an agreement that cards are enough. We don’t buy each other gifts just because the calendar says it’s the thing to do.

Even without the flowers and the candy I don’t have to suffer through that miserable feeling that I’m unwanted because I have a husband who chose me as his special person. It’s a special feeling to be chosen. Sometimes we don’t fully appreciate just how special it is unless we’ve experienced the misery of rejection. 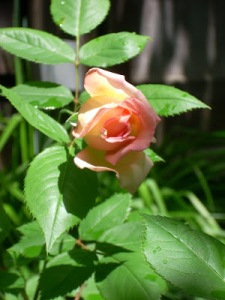 In reality, I was chosen long before my husband chose me. I was chosen when I was adopted at birth. It was actually even before then. My adoption was arranged before I was ever born.

I like to think my charming personality and my irresistible good looks were the reason my husband chose me, but I know better. I don’t know what I did to cause him to choose me, but I will be forever grateful that he did.

There was nothing I could have done to cause my parents to choose me for adoption because they didn’t know a single thing about me. Even if they chose me after I was born I wouldn’t have been able to do anything to influence their decision. I wouldn’t have known how to smile just right. I couldn’t have known that babies who don’t cry all the time are more likely to be chosen. They chose me because God had ordained that long ago. The matter was completely out of my hands.

The beautiful thing is that we’re all chosen. Each of us is someone very special to Someone.

He rejoices over us with singing. (Zephaniah 3:17)

There’s nothing we could do to cause Him to choose us. We could never be good enough. We could never do enough kind things for others. He chose us before we were ever born.

For He chose us in Him before the creation of the world to be holy and blameless in His sight. In love He predestined us for adoption to sonship through Jesus Christ, in accordance with His pleasure and will — to the praise of His glorious grace, which He has freely given us in the One He loves. (Ephesians 1:4-6)

He chose each of us to be adopted into His family.

When my parents adopted me I became a part of their family, but I had no choice in the matter. That’s not to say that I wish I had been able to choose differently. Far from it! God placed me in the most wonderful family I could ever have asked for. What an undeserved blessing!

But when it comes to adoption into His family it’s a little different, because we do have a choice. We can choose whether or not we want to be chosen.

How sad is that? Choosing to remain unchosen.

Being chosen is a gift. If you haven’t chosen to be chosen, I pray that you will choose to accept that gift. You don’t have to spend another day without flowers from the Father adorning the desk in your soul.

For the wages of sin is death, but the gift of God is eternal life in Christ Jesus our Lord. (Romans 6:23)